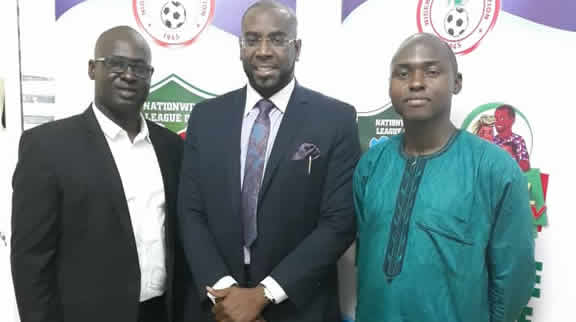 League One, NLO has been described by Sheikh Mohamed Bayorh as a platform to offer a visible platform to unknown and talented footballers at the grassroots level in Nigeria.

Sheikh Bayorh, the Chairman of the Alpha Group, a holding conglomerate based in Dubai and co-chaired by a member of the Dubai royal family, and major partners of Pipul TV, made this known during a brief visit to the secretariat of the league body in Abuja recently, as he affirmed that the partnership with NLO is geared towards the development of football at the grassroots by showcasing local football content in order to give youthful footballers a fair chance in a football media industry, where the emphasis has always been on the big stars .

“Everyone knows that the development of football starts at the grassroots level and our focus is to give voice to the unheard. We want to offer platforms to those unknown young footballers nurturing their skills at the various clubs in the nationwide league.” Bayorh said

“Pipul TV is poised to change the sequence that focuses on the big boys in the round leather game by beaming the searchlight on the stars of the future that already have a springboard to fly in the Nationwide League,” he said.

Responding to this August visitor in the month of March, Shola Ogunnowo, the Chief Operating Officer of the League body, said that the NLO will continue to be a reference point for grassroots football development in Nigeria , adding further that the league is saturated with footballers that are vastly talented and providing media coverage to these players will definitely improve the game in the country , once rated as the 5th best in the world in 1994.

“The Nationwide League is blessed with young and very dynamic footballers at the grassroots in Nigeria and we are glad to inform you that it is on record that the league have the highest number of transfer of players from Nigeria to clubs abroad.” Ogunnowo said.

“We are glad that the league signed a sponsorship and title partnership deal with Pipul TV and it is hoped that this partnership deal, when it is fully activated, will drive the process of a new football evolution in Nigeria, ” he said.

The football season for clubs in the Nationwide League will commence on 5th April, 2018 with actions across the six geopolitical zones in the country. ‘

Please download and fill the Referee's Match form after every match. END_OF_DOCUMENT_TOKEN_TO_BE_REPLACED